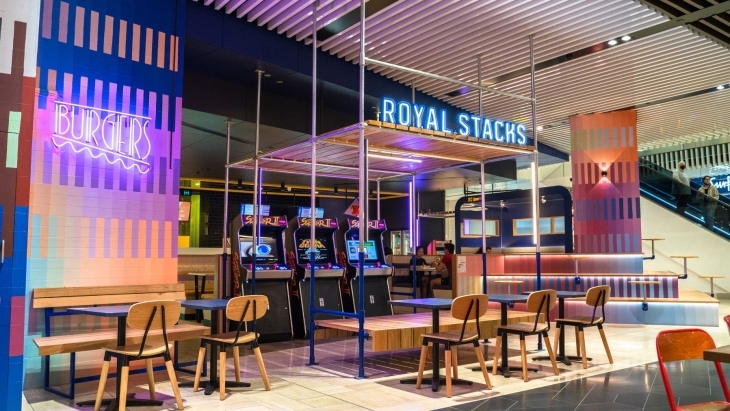 Founder Dani Zeini expounds on a potential return for the brand in China, their unique delivery strategy and approach to store design.

For Royal Stacks founder Dani Zeini, the long spell when Melbourne’s restaurants were forced to only operate via delivery and takeaway during the height of Australia’s lockdowns became a pivotal moment on how he and his team are approaching its in-store experience and renewed aspirations to be “culturally relevant” in the city’s burger scene.

“I need that energy from the people to keep going. It's really boring sitting in a restaurant with no people, like, even with Collins Street,” he told QSR Media in an interview, describing the building as merely concrete for two years.

“There was no soul. There was no vibe. There was no energy. When people came back, we just saw it breathe life into the building. And I think that helped me realize that's what we want to do.”

Zeini revealed the brand is opening 15 to 20 sites in the next 18 months, maintaining their focus on destination locations such as shopfronts and it hopes customers will be wanting to go out despite the plethora of available digital or off-premise channels.

“Traditional restaurant values — I think they're going to be stronger than ever. it's going to be so competitive. There's so much marketing, there's so much digital marketing, Instagram, Facebook…you don't know who to trust, it's gonna go back to that kind of old core values of just you coming in and you feel that old restaurant will remember your name [and] remember your order. I think that is going to be more important than ever,” he explained.

“It couldn't get any worse than the last two years. I'm really positive. I'm a very optimistic person by nature. I feel a bit of energy in the air. I feel people wanting to go out. I feel people want to hang out with each other again. And I love that. I love being around people.”

The chain recently signed a two-year partnership with Melbourne Cricket Grounds, seeing it as an opportunity to be culturally ingrained and being open to non-traditional locations. They are also exploring the possibility of being an airport partner.

“It's really exciting and challenging to adapt our business to the environment rather than try to force our existing traditional business model to an existing environment. That excites me, gets me motivated, and challenges me,” he said.

Passion for China comeback
Zeini also ruled out interstate growth at this stage, saying he may not be “equipped” or have the energy for it. He is also in talks with their joint venture partners in China for a possible comeback in the world’s second largest economy.

“We both have a passion and desire to continue that partnership and revisit. But at the moment, it's just a matter of understanding COVID and seeing what the future looks like,” he said.

Entering the U.S. is a “dream”, he added, wanting to see if he could “mix it up with the best in the world.”

“That'd be an incredible challenge for me, and that'll be a dream. But otherwise all I want to do is just be Victoria.”

He remains confident the brand is “very competitive” at their more expensive price point despite ongoing inflation, saying they are coordinating with suppliers to keep costs down.

“The consumer will have to see some value, and they're going to dictate whether we're relevant or not. And moving forward, it's a challenge for everybody, but we're doing our best. And it's all about the customer for me — beginning and end.”

Incentivising the customer to return to stores
Royal Stacks’ investment in “brighter” store design — which Zeini says was a a direct reflection of coming out of COVID — and deliberate approach to just having one third party delivery partner, Deliveroo, offer a glimpse into its approach to incentivise people to come back to their stores.

“We're moving away from the third party app model where people might be relying on the delivery partners for sales,” he said. “We are driving some people in [the] store, and Royal Stacks has never been about the most sales or the highest sales, it's always been about the customer experience.

“I want to be a restaurant first,” Zeini stressed. “I don't want to be just a burger joint. I don't want to, you know, just be a burger takeaway at home. “We want people to have an experience and I think we can really add some value by when people come in, they feel valued and appreciated and I think people see the effort and work we're putting in to designing a restaurant to make them happy.”

“Whether that is the right way or not the right path? I don't know. But I can only do what I feel is right,” he added.

Customers, Zeini argues, are not necessarily value-driven but instead seek a “consistent product that is of a high quality.”

“We come from a restaurant background, and we're trying to maintain those principles. So I think that's where the value add is,” he said. “Younger people, I find, are so much smarter, as such clever and sophisticated consumers that they could smell from a mile away whether you're being authentic or not.”

“I haven't figured out the code of how to make the delivery prices so good that it's [products] as fresh as having on-site. I can't do that and I'm not going to try to do that.”

“I want to be more of a restaurant. So maybe we go digital, do we lose a bit of the soul of the restaurant? I don't know. But I'm amazed at all the digital stuff out there,” he said. “We just opened in Melbourne Quarter. We've got old analog radios, and we have some old tube TVs and VHS. And it's really about that move from analog to digital. I feel like I'm stuck in that space.”

“Change sometimes it's hard and I need to spend some time understanding that. Yeah, maybe I'm a bit scared. I don't know,” he admitted.

Royal Stacks just launched the first-ever breakfast menu and is offering filtered, hoping this nuanced approach would strike a chord.

“I heard somewhere [that] 30% of all sales from McDonald's is before 11am so I found that pretty interesting. I heard another statistic where Starbucks 70% of the beverage sales are cold beverages. So the market is shifting there and we feel our consumers would appreciate that.”