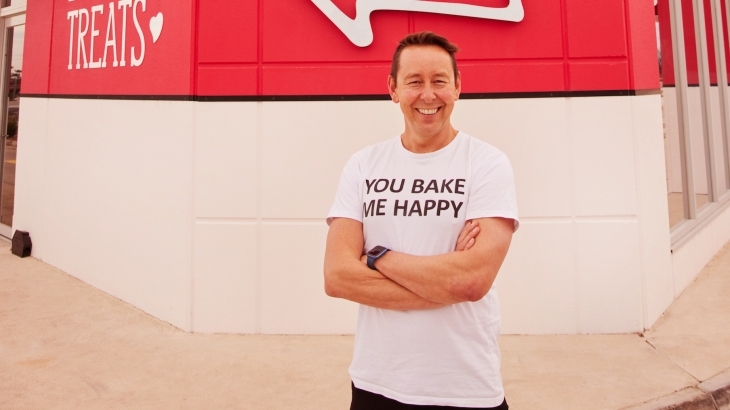 Chief executive Steve Plarre expounds on their initial drive-thru strategy, the chain’s “future-focused” brand refresh and why he is for flexible work.

If Ferguson Plarre Bakehouses’ first foray into drive-thru does what they want it to do, chief executive Steve Plarre suspects that up to 30% of their store portfolio will be in that format in the long term — part of a larger direction to rely less on shopping centres.

“It really opens us up to locations that we just don't look at right now. We either need to be in a shopping strip that has an anchor supermarket or a strong bank presence for foot traffic, where we go to a spot that's already a destination aisle,” he told QSR Media in a one-on-one interview.

“Whereas this [drive-thru location] is very destination aisle, and we would normally probably partner with a service station-type area, but not necessarily. It would be about traffic, definitely demographics. But that puts us in a spot where we wouldn't be limited to the bricks and mortar structures that we've got at the moment.”

The heritage bakery chain launched its first-ever drive-thru store in its 120-year history in late April, with Plarre confirming they have already earmarked locations and are working on ensuring speed of service and technology are up to par before offering it to franchisees.

“We're probably early enough into it to know that it's going to bear fruit and I know the team have already got a couple of locations earmarked for when we press go on that,” he said. “Part of that is making it franchise-ready.”

Sixty per cent of Ferguson Plarre’s stores are in shopping centres, half of which are kiosks. The other half, the executive said, are in-line stores and strip locations.

“Obviously, COVID heightened the attention of lots of retail brands to try and be less reliant on shopping centers. Now hopefully, that balance between landlord and tenant gets to where it needs to again, but there were really financially painful moments for a lot of tenants in that space.”

The store also includes a brand new cold drinks menu that features the “cakeshakes” — shakes made with cake —- along with frappes and smoothies. Cold-pressed juices were also launched to help the brand with revenue during summer months, a range they can integrate to their non-drive-thru stores if proven successful.

Inside the milestone store are fully-digital menus, along with two and a half meter screens that emulate their signature cake displays. Plarre thinks the business will offer the option for their network to use said screens, arguing the less-wasteful option will lead to an increase in average transaction value and save the business $200,000 a year.

Future-focused branding
The drive-thru location also has more than a fresh coat of paint, being the first site to showcase the brand’s latest branding, notably highlighting the Plarre family name whilst maintaining the white and burgundy colour palette. Around a decade has passed since members of the Plarre family bought out the Fergusons’ stake, according to information from their brand’s website.

“Part of it was just to take a fresh look, look at where the brand has been, where it's going — we certainly want to hang on to our heritage,” he explained. “There's a fine line between being redundant and a bit old fashioned and being something that's traditional that gives people trust, that shows people that we're future-focused. The new brand execution sort of deals with all of those things and tries to show that we are evolving.”

New builds, such as the recently-opened one in North Epping, will take on the new branding, but Plarre clarified that the refresh is optional for existing stores.

“It's really quite cosmetic. But if they [existing franchisees] sell, incoming franchisees will have to have to put the new signs up,” he said. It's far more modern, hip, cool, [and has] lots of options so that if people don't like collars, they can wear t-shirts and all that kind of stuff.”

Acquiring insights from retail range
Plarre also shared comments about their breakfast range, which he says is on track to hit its sales targets. They also ran a glazed doughnut, hoping to explore “new things”.

He also hopes to leverage some of the insights they are getting from their supermarket range for their store network and intend to continue investment in vegan products.

Marketing campaigns for their core menu — described by Plarre as “tongue-in-cheek” — and coffee are also in the pipeline.

“The perception of our coffee for people who have never tried it is not nearly as strong as we'd like it to be,” he said. “We're not going to try and go for any sort of really major hipster stuff, because we're just not that kind of brand.”

On franchise support, Plarre expressed excitement for their physical gala this June in Melbourne, seeing it as an informal opportunity to catch up with partners after years of Zoom calls. He is also putting together a new batch of what he referred to as a high performers group, where they select a group of franchisees to help stores that “might not be performing as well.”

Flexible work arrangements
Plarre also has a fortnightly video sent out to franchisees to update them about the business,  where he reminds them “about our realities around” COVID and what other franchisees or other businesses are doing to try and attract staff, which he views as the biggest challenge for the industry at the moment.

“We found that when we advertise for a full-time role, and we want it to be exactly the way we want it to be, we're not getting very much of a response,” he said, giving them the idea to offer flexible work arrangements where they are open for some staff to choose how many days they can work in a given week. Response rates went up “significantly”, Plarre claimed.

“We found this in the bakery and then we suggested this to our franchisees as well as a couple of other CEOs who work in the franchise space around just being flexible with the roles you might really want full-time,” he said.

The need for better customer engagement
Whether independent or those with scale, he anticipates the bakery segment to compete in terms of creating and maintaining a strong brand reputation as supermarkets too are “doing a really good job” in the space.

“You do need strong brands. It's a mature market. For some people, a pie’s a pie, a sausage roll is a sausage roll and a coffee is a coffee. So, part of it is how they connect to the brand much like [how] they might connect to fashion,” Plarre explained.

“Part of our strategy for many, many years is to not be overly reliant on any one particular segment of the bakery space. You've had cupcake bakeries come and go. Donut places come and go…I still think there's a place for a full-range bakery.”

Whilst inflation is “certainly” going to be a challenge, Plarre believes it's going to be countered by record savings.

“When things do get tight, bakeries often do quite well as people will downgrade from a restaurant experience that's expensive.”

Appetite for interstate growth remains
Plarre also reiterated that they still have an appetite to expand interstate, but says they are not in a hurry.

“Being a family business, we'll be cautious. What we want to do is make sure that if we bring Ferguson Plarre to another state, that it comes with the same level of quality, and reputation,” he said.

“We're very at peace with the fact that it's quality first. And if we get that right, the rest of it will sort itself out. We're always looking, we're investigating. But it certainly wouldn't involve a frozen logistics-type solution. If we sell fresh cream donuts here every day, if you get one in Melbourne, it needs to be the same one in Sydney, or Brisbane.”