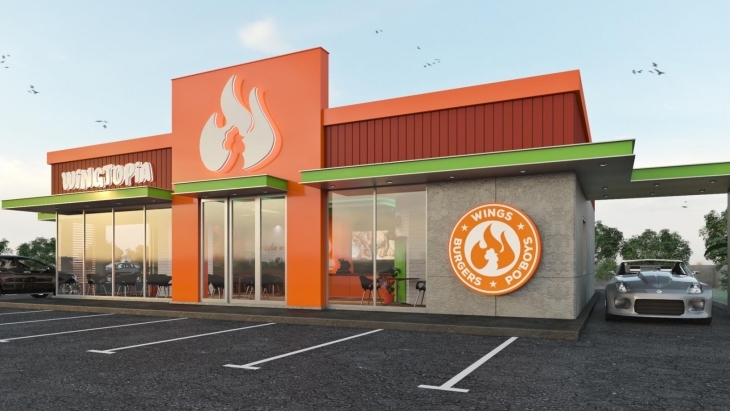 Wingtopia co-founder Darren Faulkner details his vision for his latest brand and why smaller footprints are their path forward.

Colour, consistency, being easily identifiable and a signature product.

For Darren Faulkner, these are the intrinsic traits that made some of the biggest brands what they are today.

Traits, which the QSR veteran hopes to showcase in his latest venture Wingtopia, inspired by flavors of the American South and will showcase five different styles and flavours of wings.

The market gap was clear for Faulkner, who got inspiration from his travels in the U.S. and got disappointed with the lack of such options in the country.

“It was the sterile feeling most QSRs exude that made me realize there was a gap in the market for a brand that felt homely. The Deep South is known for wholesome comfort food that makes you feel warm and relaxed,” he told QSR Media in an exclusive interview.

“Big gatherings, events and parties are all centred around food...I wanted to create that feeling. If it makes you feel good, or you can link it to a happy memory, then that’s a win.”

He also feels that wings are “untapped” in the larger chicken segment, already dominated by traditional fast food and fast casual restaurant chains.

“Chicken is second only to burgers within the sector, the fastest growing and also the most environmentally sustainable and least carbon producing protein on the planet. As we progress into the future, my vision is that chicken will once again rise to be the number one protein choice of consumers,” he said.

The concept will also sell chicken sandwiches and two types of po’boys (shrimp & chicken). Breakfast will also be served with a focus on a ‘Nawlins Brekky’, which is a fresh ham and cheese croissant, potato bites and coffee.

Plant-based products will become a huge portion of the market, Faulkner added, confirming they are currently testing our own plant-based offering.

Finding success with branding, smaller drive-thru sites
The concept itself is slated to debut in late August, opening their first site in Bayswater, WA. Its in-store branding displays a bright combination of orange and green streaks whilst the logo features a chicken inside a flame. Faulkner believes their branding is a key to desired success.

“We can see ourselves becoming as recognizable as any other leading, well-known QSR,” he said. “While most are known for their use of red or yellow or a combination of both, we’ve gone for an orange and green combination…bold and in your face, which is an exact expression of who we are and what to expect. We will stand out and people will naturally be curious.”

Stores itself will have a reduced footprint, with smaller restaurants designed with a “southern feel” and a “deliberate” focus on drive-thru, pick-up and delivery. A move, he said, is aligned with a general steer towards contactless forms of ordering.

“With statistics supporting over 70% of all orders through drive thru, why would you spend money on wasted restaurant space? For our concept, this works. With smaller footprints, we can keep our rental costs manageable.”

“While established brands have market share and larger footprints, that comes with some substantial overheads and costs. Being as big as they are, they have an image to maintain. However, being new, we can be more agile, more flexible with our choices which in part will keep our operators profitable.”

“Historically, having smaller sites hampered your ability to move volume through at much higher rates, but with the progression of online ordering, that compromise is lessened. The restaurant is still, and always will be, a very important exponent of the brand,” he added.

Initially, the brand will be positioned in high-traffic locations, such as fuel stations and convenience stores before branching out into standalone sites.

“I must stress, they will all be drive-thru. One of the main drivers of this policy is sustainability and ‘COVID proofing’ the business model, which is why we’ve also invested heavily in our ordering platform which links directly into our POS and removes our reliance on in-store purchases.”

Up to 30 sites in five years eyed
Despite COVID-19 making sites “logistically untenable” in other areas, Faulkner expressed confidence they can gather momentum in the area.

“We had been energetically engaged in negotiations with two sites in Queensland but it became obvious we couldn’t rely on being able to travel and therefore, the focus became about establishing the brand roots in Perth and then expanding out. It’s been done before, both Hungry Jack’s and Subway had their first stores in Perth, using it as the launching pad for the rest of Australia. We’ll be no different,” he said.

“Being focused initially on Perth will allow us to ensure the brand's viability, profitability and operator confidence, ensuring systems and processes work to their capacity.”

Faulkner also confirmed plans to have a “conservative but achievable” goal to 25-30 sites within 5 years. He said the estimates are based on organic growth, which is self-funded by cash flow within the company portfolio and does not factor in a capital injection.

WA and Perth, specifically, will host the first three to five stores before expanding into other territories and states. Potential franchisees are already lining up.

“We would want to ensure the structure, systems and processes are fully engineered, with most kinks worked out before venturing further east,” he said. “Prospective partners will have specific traits that we value and align with the brand. They must share our vision, are passionate about Wingtopia and care about our customers.”

“Without Steve and Tanya, Wingtopia would still be a concept on my personal computer. They could see the vision of what I wanted to achieve and backed it up with both their financial resources and industry-specific skill set,” he said.